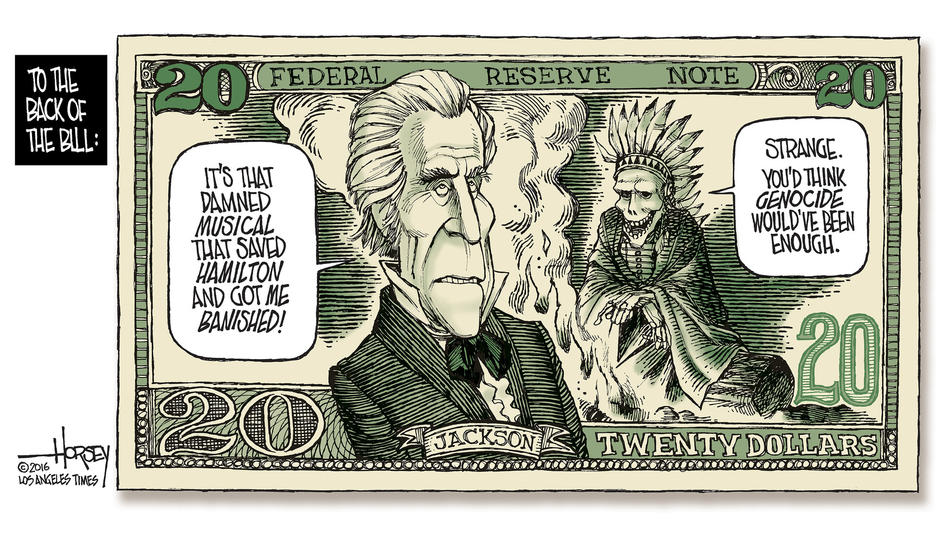 Unless you spent 24/7 in an archive last week or went into isolation to put the finishing touches on your 2016 SHEAR conference paper, you know that the U.S. Treasury Department announced that it was replacing Andrew Jackson with Harriet Tubman on the front of the $20 bill.

The news was met with mixed reactions. Andrew Jackson VI blamed political correctness for his ancestor’s move to the back of the $20, while former U.S. senator Jim Webb made a similar argument: “This dismissive characterization of one of our great presidents is not occurring in a vacuum. Any white person whose ancestral relations trace to the American South now risks being characterized as having roots based on bigotry and undeserved privilege.” Former presidential candidate Pat Buchanan called the change “affirmative action raised to fanaticism, a celebration of President Obama’s views and values, and a recasting of our currency to make Obama’s constituents happy at the expense of America’s greatest heroes and historic truth.”

A number of SHEAR members weighed in via the media as well. Andy Burstein and Nancy Isenberg supported the change, remarking, “Ultimately, the question we face is how important an honest encounter with history is, versus how needful some will always be to cling to the rule of the patriarchs, to our long-dominant national mythology that consecrates the singularity of founder genius.” Dan Feller, chief editor of The Papers of Andrew Jackson, pointed out that “we don’t honor people on the currency just because they’re important. We do it because we admire them, or because they represent something we value.” Jackson, in other words, no longer represents American ideals. Catherine Clinton outlined the historiographical shift that now recognizes women’s contributions. “Historians and biographers, professors and students, pundits and theorists, and the inevitable legions of naysayers may find these critical moments challenging and often unsettling,” Clinton observed, “but they signal change is afoot.”

The alterations to the $20 bill, as well as to the back of the $5 and $10 bills, will take years to implement, and it seems likely that the debate over the decision will only add to the heated political discourse in which the nation is currently engaged.